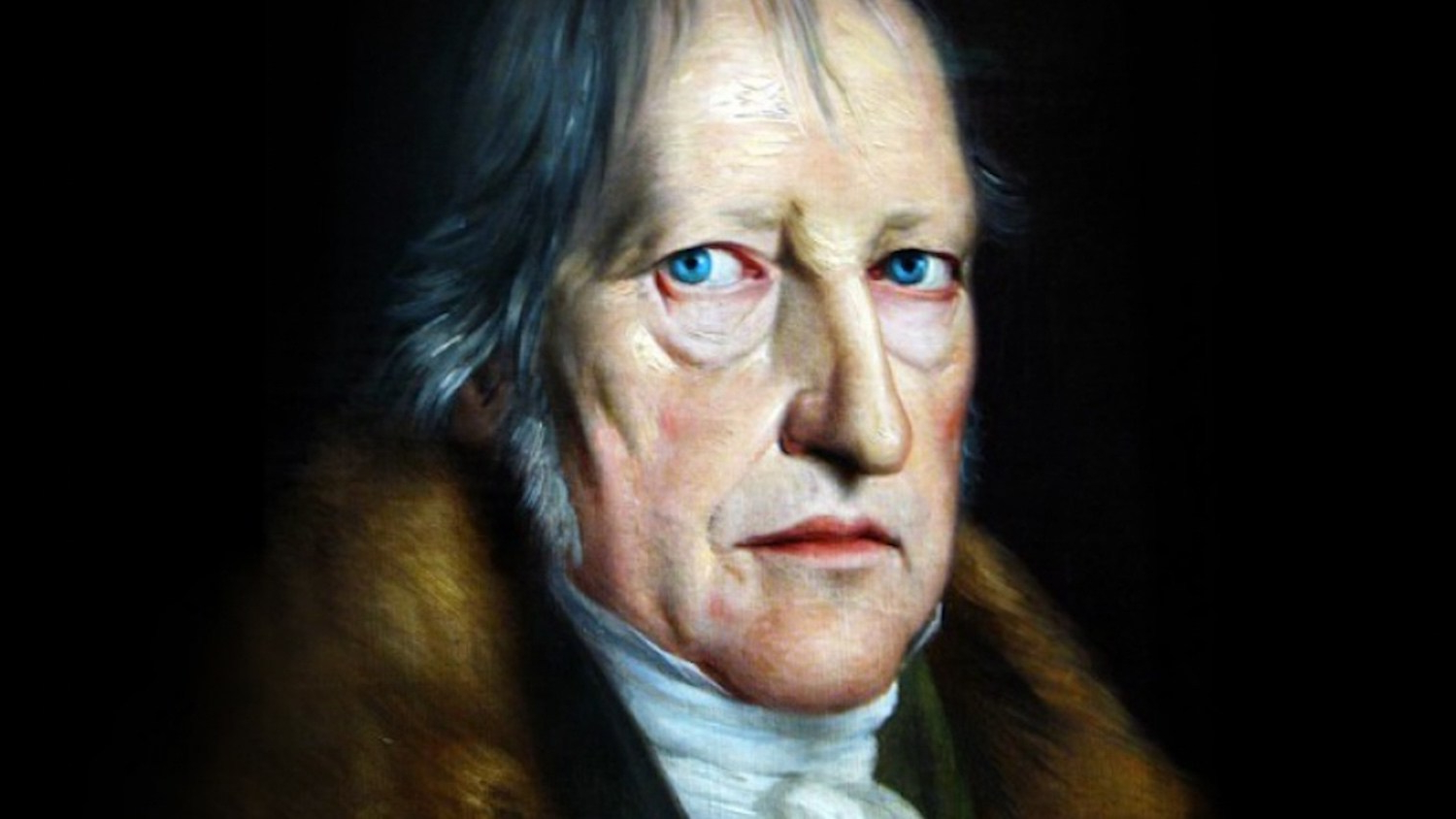 Hegel: Phenomenology of Spirit, and Lectures on Fine Art

Hegel: Phenomenology of Spirit, and Lectures on Fine Art.

It is a two-step process where Hegel suggests that an individual could gain his recognition, his identification, through a struggle, a battle against another consciousness and could also recognize the world as the emanation of the Spirit through a superior form of art: romantic art. In other words, Hegel ponders the building of our identity and about the form/identity we give to the world. Therefore, we can define Hegel’s philosophy as an identity philosophy that leads as us to ask: how does an individual gives an identity to himself and to the world?

It is first through the dialectic of the master and bondsman that the building of an identity can be explained (I) and then through the movement of the consciousness of the artist in his relation to the spirit that we will present the symbolic, classic and romantic art (II).

I. The birth of the identity or the Master-Bondsman dialectic

a. Two consciousness, two identities fight to be recognized

Although Hegel is not clear about the kind of entities we have to figure out behind these “consciousnesses” or the specific situation that could result in such a struggle between a dominant consciousness and a dominated one, we can imagine two individuals facing each other’s. This lack of clarity actually gave freedom to many interpretations. One of them could be recalled briefly to give some consistence and understanding of the kind of entities that could be found in the Master-Bondsman dialectic. Then, we will explain the process itself that should lead to the freedom of the slave and to the chaining – not the bondage though – of the Master to the free slave.

The first interpretation is stressed by James Ogilvy[1] who writes about Freud, Adler, Rank and Levi-Strauss: “they suggest a way in which two sets of master-slave relations – large to small and man to woman – are themselves interrelated. By virtue of his development of greater physical size and strength, man inherits the burden of mastery from those “large ones” who once mastered him. But he brings the burden of this physical mastery to his relationship with women. Man finds himself a victim of the dialectic of mastery described by Hegel.”  Here, the Master-Bondsman dialectic is applied to the relationship between two formal individuals: men and women. In our demonstration of the dialectic we will take as example the relationship between an employer and an employee as the former is the dominant and the latter the dominated one – not recognized in a first time.

It is indeed in the first stage that the struggle plays a major role as, according to Hegel, the two consciousnesses take different risks. The one that took greater risks will be the Master while the one who took only a few risks during the struggle will end up as a slave. Here, we will keep explaining Hegel’s thoughts through the employer-employee relationship to give some consistency to a very abstract dialectic. The employer, considered first as an entrepreneur, is the one who took more risks: he invested his money and his time to build a business and had to go through financial and administrative hurdles to build a successful enterprise eventually, and be able to hire employees to assist him in its operations. On the other hand, the employee did not take as much risk as the entrepreneur: instead of risking not being paid and losing his own money, he decided to work for an employer who guarantees a monthly salary. Two consciousnesses oppose each other but one is commanding and the other one is working in the real world, directly with the Being.  Hegel points out that “the relation of both self-consciousnesses is in this way so constituted that they prove themselves and each other through a life-and-death struggle. They must enter into this struggle, for they must bring their certainty of themselves, the certainty of being for themselves, to the level of objective truth, and make this a fact both in the case of the other and in their own case as well. And it is solely by risking life that freedom is obtained.”[2] (187 – p.543). The master is the one who is recognized –employer and feeder – and the slave the one who is not recognized since he is one among other employees, and thus not recognized by the master as a full consciousness.

b. Is the one gaining recognition a full master?

The dialectic then evolves over time as we would expect in an employer-employee relationship. The employer is commanding but has no access to the reality of the world as it is the employee who is on the frontline, dealing with the Being or, to put it simply, the world and its manifestations: a factory, a shop, a hospital. Hegel writes that: “the master, however, who has interposed the bondsman between it and himself, thereby relates himself merely to the dependence of the thing, and enjoys it without qualification and without reserve. The aspect of its independence he leaves to the bondsman, who labours upon it.”[3] (190 – p.544). In other words, the employee has a direct access to the Being while the Master is enchained to the bondsman in order to get the benefits of the work of the slave – a financial profit in our example.

c. Gaining its self or being for self through work

How, then, is the bondsman supposed to gain freedom and being recognized as a full consciousness, as a being in self and for itself?  Again, Hegel is not clear whether the master recognizes him as free, as a slave who escaped the master through his work. Being aware that he is the one dealing directly with the reality of the Being, of the world, the slave eventually realizes that he is the one shaping the real, the tangible things, and therefore, comes to full consciousness, fully aware of his role as engine of the History. “Therefore, that consciousness, qua worker, comes to see in the independent being [of the object] its own independence.”[4] (195 – p.546) Hegel wrote. The slave thus wins his freedom and independence through his work. It can be understood here that having a job gives an employee a recognition by others consciousnesses since others see and acknowledge him as the sheer force creating services/products. Is it possible though to state that the consciousnesses flipped and that there is no more hierarchy between these two free consciousnesses? Here, Hegel does not go through such issue.

II. The movement to full self-consciousness through the art

a. The symbolic art

Symbolic art is the first stage attained by the artist when it comes to offer a true image of the reality. It is, though, the most unachieved form of reflection of reality. As Bènard and Bryant explain: “in the symbolic form, the idea seeks its true expression in art, without finding it; because, being still abstract and indeterminate, it cannot create an external manifestation which conforms to its real essence.”[5] The symbolic art cannot produce a complete expression of the true reality of the world as it only reflects God-made natural creatures and is flawed by its lack of spiritual significance as Hegel stresses: “by this means the meaning cannot be completely pictured in the expression and, despite all striving and endeavour, the incompatibility of Idea and shape still remains unconquered. This may be taken to be the first form of art, the symbolic form with its quest, its fermentation, its mysteriousness, and its sublimity”[6] (p.552). The artist should now overcome the problem of a simple reflection, of an academic description of the nature by introducing his inspiration. By this way, he will be able to deliver a more personal form or art base on his own thoughts.

Through  this form, the artist gives people access to the consciousness of the reality of the world since he tries to go beyond what the nature offers to introduce his own spirit. Bènard and Bryant explain again that “in classic art the artists borrow their ideas from the human spirit, from the human heart, from the human life.”[7] Classic art or Greek art actually focus on human forms and overcomes the problem of the God-made representations but still fails to reveal the Spirit as Hegel underlines: “therefore here the spirit is at once determined as particular and human, not as purely absolute and eternal, since in this latter sense it can proclaim and express itself only as spirituality” [8] (p.553).  Thus, again, the artist should, to give people a complete access through his work to the full consciousness of the world and its true reality, embrace spirituality to reveal the absolute Spirit.

This is the final stage where the artist is supposed to give individuals an accurate image of the world since he does call into play the spirituality understood as the Christian form of art – contrary to the Greek form of art. Bènard and Bryant gives an explanation of what is the romantic art: “the human soul must bring itself into actual existence as a person (subject) possessing self consciousness and rational will; and this it accomplishes through becoming itself pervaded with the absolutely substantial; anthropomorphism for the first time attains to its ultimate fullness and perfection.” [9] This access for individuals to full consciousness of the absolute Spirit through the art is actually made possible thanks to the artist who embraces sensuousness and spirituality. As Hegel points out, our consciousness is given a full and absolute representation of the world, manifested outward as a spirituality, drawn by an inward spirituality: “we may, therefore, in short, adhere to the view that at this third stage the subject-matter of art is free concrete spirituality, which is to be manifested as spirituality to the spiritually inward.”[10] (p.555). In other words, the spirituality is a concrete phenomenon, a representation of the world built over centuries by the inward spirit of individuals. For instance, Europe has been built over centuries through the actions of inward spirits (war chiefs, leaders, thinkers, etc) who gave birth to the creation of a European Spirit that artists try to grasp and render in their work. The artist encounters this spirituality and brings back through his work over nature and human beings the manifestations of the Spirit to our consciousnesses, understood as the base of our inward spirit. Romantic Art is the Christian hyphen of a dialectic which oppose inward spirits (or the spirits of individuals) and the Spirit (or the world made up by God, ergo, individuals).

In conclusion, it is fair to state that through Hegel’s philosophy we build an identity whose completion is full-consciousness, being recognized in itself and for itself, and who understands, through the works of art, the world as an absolute Spirit.

Vincent B. Leitch and al. The Norton Anthology of Theory and criticism, 2nd ed. Norton & Company. 2010

Ogilvy offers an interesting view of Hegel’s dialectic since he focuses his research on Freud and the way we build our identity in a familial environment through our relationship to our father and to our wife/husband. By this way, Ogilvy allows us to renew our understanding of the Hegelian dialectic. Bènard, Charles, and Bryant have explored and explained through the three different forms of art introduced by Hegel in Lectures on Fine art. The main contribution is their clear understanding of every form of art and the meaningful examples they give: the myth of Osiris, the Egyptian god, for the symbolic art; the Greek art and its poets such as Homer for classic art, and eventually the role of the Christ and the Holy Spirit in the building of romantic art.